Home Dining Soleil: An Experience in Flavor, View and Variety

If you’re looking for fine dining with a backdrop of the Gulf of Mexico, Soleil located in The Inn at Crystal Beach is your spot. It’s a grand view of the beach and Gulf, great seafood and much more with an upscale vibe. 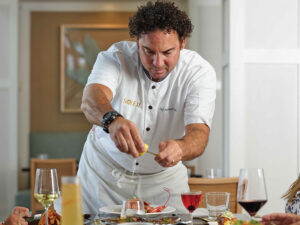 We tried an array of entrees and loved them all. Celebrity Chef Michael Sichel takes ordinary menu items such as steak, and turns them into a delicious work of art that leaves your taste buds wanting more. Dishes are positively different, ones you won’t find anywhere else, such as oysters prepared several ways that pay tribute to the Bienville style of the Gulf Coast but with Chef Sichel’s twist. The crab rolls were perfect, allowing the crab meat taste through, instead of the sauce. Chef Sichel delights in leaving his creative mark on each and every dish. The grand finale? Pastry Chef Michael Bump presented us with thoughtfully prepared delights to top off our meal. Pair your appetizer, entrée and dessert with non-ordinary, hand-chosen wines designed to complement, and you have a winning night out.

As a New York native, Chef Sichel grew up immersed in the ingredients, heritage and family-style cooking of his Italian roots. A Culinary Institute of America (CIA) grad, Chef Sichel’s first job in the kitchen was at New York City’s legendary Gotham Bar and Grill, and he credits its pioneering Chef Alfred Portale as his most influential culinary inspiration. Chef Sichel has since been in the kitchens of Rubicon (Drew Nieporent’s San Francisco blockbuster restaurant), the Abbey of Sainte Croix (Salon-de-Provence, France), Auberge du Soleil (Napa), Restaurant Indigo (New Orleans), and Galatoire’s (New Orleans), among others. 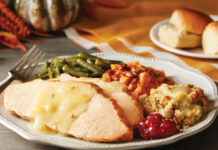 AJ’s Feeds the Community this Thanksgiving 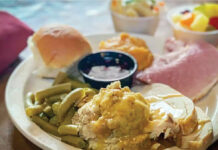 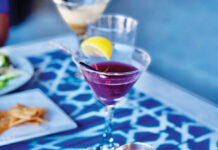