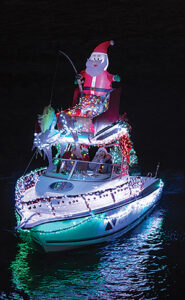 Each year for the past 35 years, Destin boat owners have made the holidays a little bit bigger and brighter by adorning their vessels, large and small, with as many lights and decorations as possible; then cruising in, all in a gleaming row, through the historic Destin Harbor ensuring we’re all in the holiday spirit.

Participating boats light up the night on the Harbor where the brightest, most creative ones win and a few lucky seafarers gain bragging rights to the most decked out boat between Pensacola and Panama City. The same vessels that command Destin’s waters on warmer days take on blinking lights, animated characters and other holiday fare for this December Destin tradition that pleases thousands of fans watching from the Harbor’s docks, businesses and boardwalk.

Sponsored by the Destin Fishing and History Museum and Jimmy Buffet’s Magaritaville, excited bystanders gather to watch boats of all shapes and sizes—glittering, bright powerboats, party boats, pontoon boats, sail boats and yachts—parade by as costumed revelers join in the mix. Faithful crews decorate, dress in theme costumes and entertain using all things that assault the senses from a visual and sound standpoint. “It’s just as much about the boat community as watchers and bystanders gather in the many restaurants and docks along the Destin Harbor,” says Mary Ann Windes, Destin Fishing Fleet, Party Boat Destin Princess and Party Boat Destiny. “It’s a good excuse to go boating in the winter and celebrate the holidays. You’ll see elaborate light displays choreographed to Christmas music while other boats sport famous passengers like Santa and the Grinch. All are clearly enjoying their moment in the parade,” she says.

Museum Executive Director Kathy Marler Blue says there can be as many as 30 boats competing in the eight boat categories. Cited by Coastal Living as one of the Best Holiday Boat Parades in America, the first boat parade was started in 1986 by the first museum which was the “Destin Fishing Museum” and was located in the old “Jitney Jungle” building (now where the McGuire’s complex and businesses are) as a way to give back to the community for all the support shown to the museum. That first museum was started in 1985 and operated until 1996 when the property was sold. Many of the charter boat wives that helped start that first museum started the boat parade. It was continued through time. In 2003, the community came together again and started a new museum, The Destin History & Fishing Museum, which was opened to the public Oct. 1, 2005, and the group continued the boat parade. Proceeds benefit the Destin History and Fishing Museum.

This year’s Holiday on the Harbor Boat Parade begins at 6 p.m., Sunday Dec.12. Boats will start lining up in the Harbor from 5 – 5:30 p.m. then will make their way from the east side of the Destin Harbor (near Boshamps restaurant) to the west side (Harborwalk Village/Emerald Grande) ending near the Destin Bridge and East Pass area. You can view the boat parade anywhere from Boshamps Seafood and Oyster House (approximate starting point) along the Boardwalk to Harborwalk Village where it ends as well as the Destin Bridge and Norriego Point. Many restaurants in between and along the Destin Harbor have a nice view of the boats including Tailfins from the 2nd and 3rd floor, AJ’s from the upstairs area, Margaritaville from the 2nd and 3rd floors, the Boathouse, both levels of Harry T’s and Brotula’s outside seating.

Celebrity judges will be stationed at Harry T’s in HarborWalk Village. Judges rate each boat on its originality, lights, appearance and special effects.

There are awards in 10 categories. Additional awards include best overall boat entry City of Destin award for the boat that best showcases the Harbor heritage.

Immediately following the parade is a Fireworks show over the Destin Harbor. Live entertainment is from noon to 7 p.m. on the Main Stage at Harborwalk Village, with Santa at noon, the Ballet Conservatory at 2 p.m., Santa at 3 p.m., the Emerald Coast Community Band at 4 p.m. and The Village Brass Band from 5 to 7 p.m. For more information on Harborwalk’s holiday festivities, visit Facebook.com/HarborWalkVillageDestin. 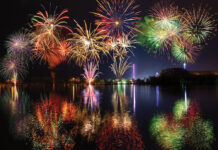 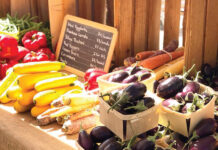